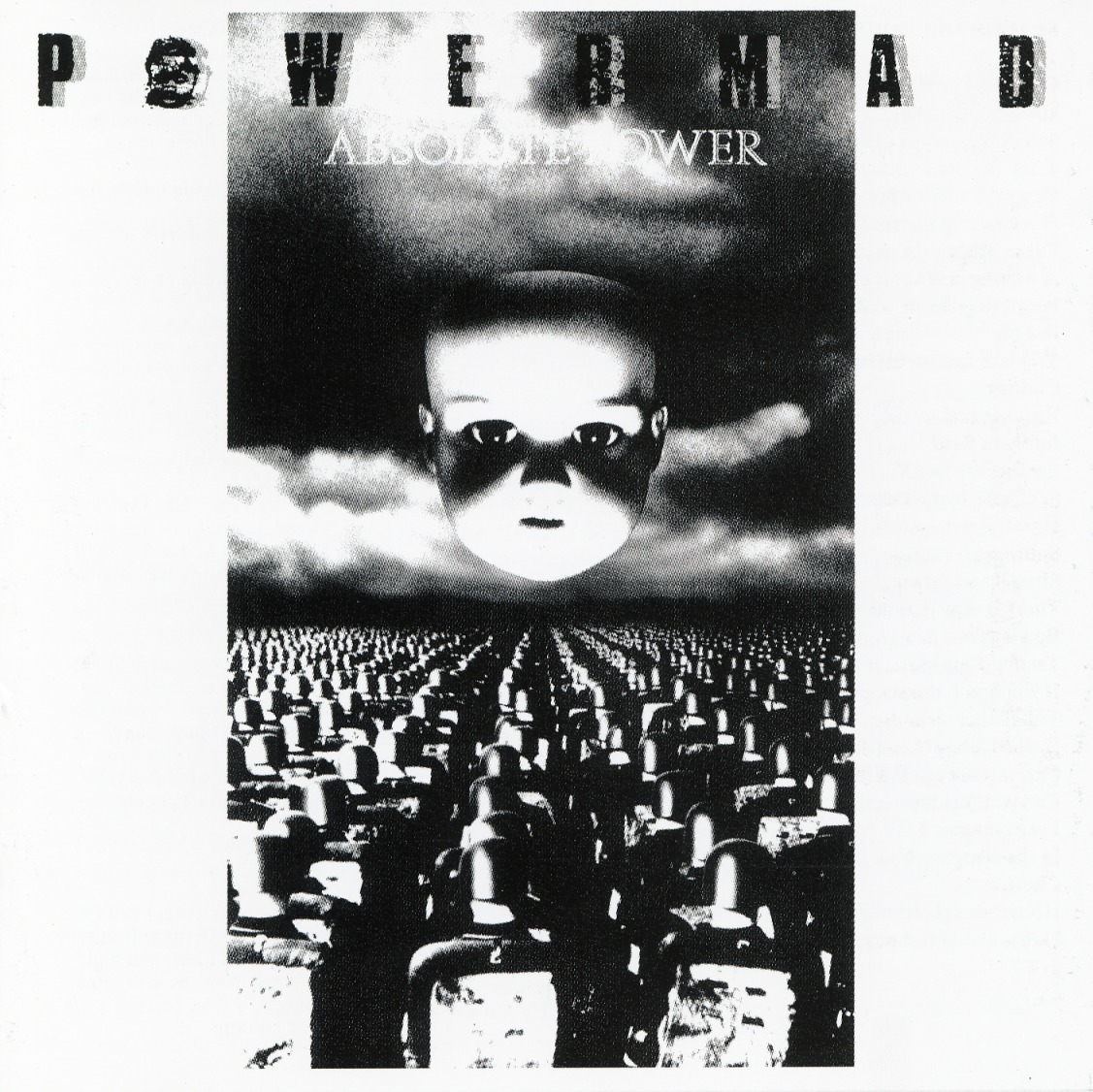 Powermad are this band of fellows from Minneapolis who are blessed in that they’ve very recently seen the release of their first full length LP on Reprise/Warner Bros. Records. They do have a couple of early demos and EP’s to their name, but whether you’re familiar with the band and their music already or not, long-winded Powermad bassist Jeff Litke has got lungfuls of history, observations, and stories with which to fill you in. The band may need an introduction for many of you, but Jeff spews the vital statistics in the paragraphs to follow, so read on and you’ll know plenty; beginning with how being on a major label has changed the day-to-day lives of the band members…

“We’re all doing the band thing full-time now, which wasn’t always the case, but now it becomes priority to focus all our energies on this type of thing. Fortunately we’ve got some great opportunities that keep us pretty busy. There’s just no time to try and work a full-time job still outside of actual band activities. There’s a lot happening for us, and there’s a lot to keep on the ball about. Plus there’s sources of income available to a band in our situation, either through studio union scale for doing session work, and other types of royalties that way, and also you have recording budgets and stuff. Between the time we did sign and the time we began working on this record, we were in the studio a week or so, and did the EP. We ended up having either advances from the merchandiser, or advances against our royalties from the record company, or something budgeted into the actual recording budget for band living expenses. Basically, what it all boils down to is band expenses, the band has to exist, and be in condition to write songs and develop. Fortunately there are opportunities for us to get money.”

The EP Jeff’s talking about is “The Madness Begins…“, a 4 song disc recorded in August of 1988 at Paisley Park studios in Minneapolis. As the band’s first major label release, it was a big help in making the band known. Warner placed ads in one issue of five big metal publications offering free copies to anybody who wrote in asking for one, and, as Jeff explains: “The record company had certain expectations, and the response just blew out those expectations. Total we had 60,000 requests for it through ads. I believe we gave away 10,000, and we sold about 15,000. The ‘Terminator’ video was on Headbanger’s Ball for four or five consecutive plays. It helped record sales, but the record wasn’t a sales thing, it was more of a promotional thing. For a promotional thing, that is very successful. The company got a little bit more than they bargained for, and that only helped us. It put more spark in the project for everybody.”

He goes on to describe the relationship this one little band has with their big multi-national record company. Jeff: “They’re a great company. So far they’ve had nothing but enthusiasm about the whole Powermad project, which is nothing but great for us, because being the first metal band on the label is kind of an honor. The Reprise staff is still real new as far as marketing the band, actually breaking the band, and getting our press released for the record. Ifs great because they show a lot of enthusiasm, and they’re always eager to learn more, and whafs great about this band is that we’ve all got pretty good imaginations. We’ve had to do on our own for so long, and the record company sees that we’ve got things on the ball, too, as far as ideas, and suggestions, and things happening, so it’s a real good relationship because we’re not just plucked into the formula of how to break a band and market a band, or get radio play or whatever. It’s all pretty much just seeking out the way to do it. A lot of bands get signed , and they expect things, they kinda stop doing things themselves. When the company sees that you’re assertive and motivated, they can’t help but to be equally or more motivated about the project. That’s how Reprise are with us.

Now if we could just get the press rolling, this record should maybe be heard by some people.”

So being heard is a top priority for Powermad these days, which is a strange position to be in, as most power metal-type bands on major labels these days garnered great legions of fans in the metal underground before stepping up to the big time. Did the band bypass this underground to a certain extent? Jeff: “To a certain extent. We’ve done no real interviews with an abundance of fanzines, however, we’ve sent press to fanzines, and gotten our demo tape reviewed and stuff. The underground didn’t give us a super-widespread following, but a base, nonetheless. In 1986 we released the Combat Boot Camp 5 song EP, and that was targeted at nothing, I guess. It was ultimately an underground type of thing, with the ‘fledgling-band-demo-pressed-onto-vinyl’ thing, with the camoflage cover, and that whole shot. It just never did anything. Obviously we tried as much as we could, but we didn’t know the game that well by then. After we released that EP, we went through a line-up change, in January of 1987, as Bill Hill and Powermad split company. We recruited Mr. Todd Haug on lead guitar, which was a real turning point for the band, and was another growth stage for the band. The addition of Todd injected a lot of freshness and new direction that really mixed well with what we were doing. Then we got a record deal with Mercenary records, and we were going to do a record. It was all so new and everything, with Todd in the band, and here we were in the studio again with ten fresh songs, the experience was great. We came out with a ten song tape that never did get released on Mercenary.”

With the help of an interested friend, however, it was this tape that landed Jeff, Todd, powerfully voiced singer and rhythm guitarist Joel DuBay, and drummer Adrian Liberty their coveted major deal. The rest, as it’s said that they say, is history. Now ifs come to a point where Powermad needs to go on the road, a point which Jeff stresses. “It’s tour time, to let people know what the fuck’s going on, and bring it to the streets. The band is the commercial for the record, that’s the whole idea. We’ve got our tour itinerary right now. Detroit is our first official tour date, so it’s a pretty big date, it’s a pretty big deal. The club isn’t going to be such a great place to play, but the main thing is that we’re going to be out there playing. The more we do that, the better, because we’ve really developed in the band context, as far as developing songs, and technically the music is like clockwork. It’s really starting to come to us naturally. We’re starting to focus on what we’re really trying to express. Now, expressing that to a live audience is the next phase, and it’ll be an exciting one, I’m sure.”

By the way, what Mr. Litke thinks makes his band of self-professed Rush freaks worthwhile is a solid, pulling groove, and Powermad‘s “soulfull” vocalizations, saying “it’s a great combination.” Now that you’ve got the full scoop on this quartet, you should know what to expext from Absolute Power, the big new album, and should be curious enough to check out the band in a live setting if you get the chance. I say watch Powermad now. After all, they’re only going to be young, fierce, and hungry to prove themselves worthy of success but once!