Finally, West Germany’s Destruction is making a dent in the North American market. Thanks to Noise International for providing the band with a solid U.S. contract, allowing metal fans west of the Atlantic to experience the progressive speed that is Destruction. 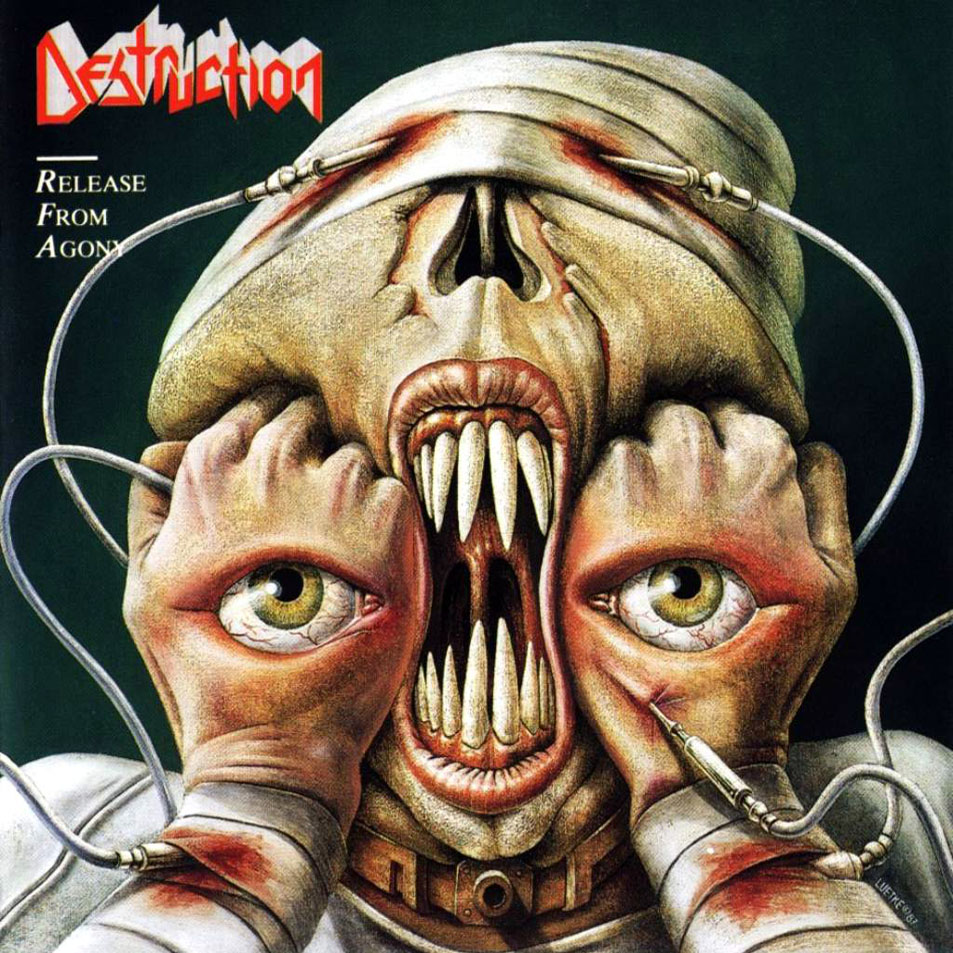 After a disastrous licensing deal with Profile/Rock Hotel Records that left their last studio LP, “Release From Agony“, hanging with limited exposure, Destruction can now claim major distribution and an American following that grows with each day. “We had a couple different offers,” says guitarist/vocalist Schmier, “and we thought the Noise on CBS distribution would be the best for us because Noise’s main office is in Germany and we got a contract under German law and we got a good contract and we’re quite happy with the way they work. I think Noise is helping to do something for us on the promotion side and to help us get over and tour. I’m quite happy right now with the way it goes.”

Sheer bad luck has prevented the band from becoming a metallic household name, but that was then…“I know we have a big underground following, but a lot of people didn’t hear about us for a long time. Magazines didn’t write a lot about us and everything so there’s a lot of things we’ve got to do in the future In the States. We gotta step forward.”

And step forward they did. Destruction was finally able to tour the States in support of their U.S. Noise debut, “Live Without Sense“, a lengthy live LP that holds claim to the best of Destruction. The tour, a slot with The Cro-Mags, was particularly successful and proved that there’s nothing in metal like this four-piece.

The band’s only previous live exposure in the U.S. came nearly two years ago when they played limited shows among the northeastern states. “I think that was the first time the people really soreamed-fuckin’ loud-the lyrics. I had never heard people really screaming loud our lyrics, like at LAmour’s in Brooklyn. I had goose bumps, beacuse it was so loud. It was so fuckin’ great! It was some really good impressions we had from people in the States.”

“Probably if s better that we come over to the States this late, because people are gonna see a lot better band than they couldVe seen some years before.” No doubt. Destruction has developed into an immaculate speed unit with a sound all their own. Their origins saw many Slayer comparisons, yet I honestly believe they’ve musically left Slayer in the dust. “It just happened to us, because we were really young when we started. The (first) record came out when we were like seventeen. I was seventeen at the time. The progression, it was quite obvious that it got to happen. Y’know, you get better over the years. You practice more and you try to get better. The songs were just getting like this because that’s the way we write songs right now. We’re not trying to write songs like this. They just get out of us.”

Four albums and two EP’s after their conception, “Live Without Sense” was put to the streets, which is only case in point of how incredibly tight Destruction is. “If you hear the live album, you’re going to find no big difference between old and new songs. Obviously the older songs are a little faster, a little more straight, but the way we play everything right now, everything sounds really ‘Destruction’, everything doesn’t sound like if s from an old or new album. Just some songs are faster and some songs are slower. That’s the only difference. I think actually that the songs from ‘Release From Agony’ sound a lot better on the live album than on the studio one. I actually think we’re alot heavier live than in the studio.”

That may be the case, but there’s no denying Destruction’s studio blast, even on earlier offerings, which have finally been made completely available. Thanks to RC Records, a Roadracer affilaite, “Eternal Devastation” and “Mad Butcher” can be found on CD and cassette at your local metal emporium. “I think that it’s better for us that the old stuff, that you can get it right now. How should you get popular when there’s no records from the band in the stores, even if you’re good or not. I’ve been in the States and I’ve been in Canada and I was shocked to know that if s incredibly (hard) to get the records. A lot of people told me they can’t get the records and they’re spending a lot of money for it. I’m sure if s going to change now and ifs going to get better for everybody-for the fans and for us.”

German fans have always been lucky as far as the availability of Destruction product, but as Schmier states, they have problems of their own. “I know a lot of people in America think that the scene here is fantastic and ifs so great and stuff like this, but there’s also a lot of problems because the market is overloaded, there’s too many bands, too many concerts, people don’t know which concert they should go to anymore because they don’t have that much money. So a lot of bands did bad tours here because people couldn’t support it, to go to all those concerts. That was the main reason we were doing a supporting tour last year, because we didn’t want to headline because there was so many concerts around, so we said lets go on a deal with another bigger band. That was a good step to do, because we got to play all over Europe that way and we got a lot of people and big arenas and everything was great.” American bands touring in Germany might see a different problem. “The biggest difference about the German people is—the guys from Sacred Reich told me from Arizona-is that they never saw a crowd that was so drunk than the Germans. I think that says a lot. Sometimes they drink too much and they’re too fucked up at the concerts. I think that’s a problem sometimes.”

Now that the Destroy-boys have conquered their plague of bad luck in America, I have no doubt you will be hearing and seeing plenty more. With a successful tour, where Destruction’s merchandising outsold The Cro-mags by many percentiles, these boys are hardly about to self-destruct.